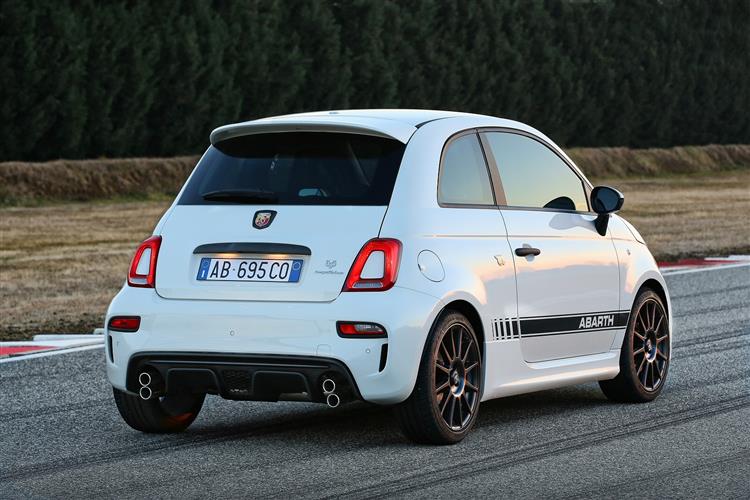 The crazy Abarth 695 is one for the true hot hatch connoisseur. Jonathan Crouch reports.

Mainstream car manufacturers tend to be a conservative bunch. It's not too often that something wonderfully unhinged gets past the endless committee stages and vanilla customer clinics. And it's rarer still that such products make any money. Renault has tried again and again with cars that make you wonder if something periodically seeps into the water supply and Alfa Romeo can occasionally go way off-page with some of their wares. Add Abarth to that list. Okay, it's already got a reputation for building small cars with big personalities but the company has excelled itself with the crazy 695. A hot hatch based on the Fiat 500, this one packs a 180hp punch and weighs less than a tonne. It's a piece of work.

The Abarth 695 rewards a certain degree of context. Taken in isolation, 180hp isn't a great deal in a modern hot hatch. Factor in a kerb weight of under a tonne, however and you start to form a picture of a very potent performer. Suddenly you're in the same power to weight bracket as cars like the Renaultsport Megane 300, the BMW E36 M3 and the Audi S4 - and if you know anything about cars you'll appreciate the tastiness of that little list. The 695 drives through the front wheels, yet still puts its power down cleanly enough to get to 62mph in 5.9 seconds and onto a top speed of 143mph. The transmission is interesting, as with a tick of an options box you can own the only street-legal production car fitted with a quick-shifting 'dog-ring' sequential manual gearbox, which will bring a certain level of ferocity to full-bore upshifts. Massive Brembo brakes look agreeably over-specified for such a tiny car.

The Fiat 500 just seems to lend itself to the creation of great-looking hot versions and this top Abarth takes the ball and knocks it into the next postcode. Dubbed "the most Abarth of all Abarths", the aggressive 695 comes in hard top or convertible forms and ramps up the sportiness over its 595-series showroom stablemate. There are special 17-inch alloy wheels and the famous Record Monza exhaust system with its unmistakable roar, which has accompanied generations of Abarth drivers and always been synonymous with power and performance. Inside, there are seats with Sabelt Fabric and a Matt grey shell, plus tar cold grey details, from the mouldings to the door handles and the mirror caps. The same colour choice creates a unique dashboard fascia, which has always been an iconic element of this Abarth model. The exclusiveness of the materials can also be easily seen in the Alcantara-upholstered cockpit, in the steering wheel which combines Alcantara and carbon fibre, and in the aluminium gear knob. Want more? Then pricier 'Turismo' and 'Competizione' variants provide even more exclusivity.

You might need to be sitting down with a warm drink to hand when we get to the price. It's around £25,000 upwards. You might either view that as a hilarious amount to be asking for a hotted-up Fiat 500 or alternatively, not a bad deal for a machine that can keep some really serious sports cars honest. We're leaning to the latter view. The 695 will be huge fun on a track day and besides, when you start fitting lightweight seats, harnesses, big brakes and other lightweight parts to a cheaper hot hatch, the sums soon mount up. Here it's all done for you. All you have to do is foot the initial bill and then you're good to go. After all, what is comparable? A Renault Megane 300 would be the closest thing in terms of focus, but the 695 is perhaps closer to that car's predecessor, the aggressive Megane R26.R replete with rollcage and plastic windows. Right at the moment, there's nothing that dares to square up to the 695.

One advantage of running a lightweight car powered by a 1.4-litre engine is that fuel bills aren't going to be ruinous. Fiat quotes a figure of 40.9mpg on the combined cycle, which means emissions are pegged at just 156g/km, which is excellent for a petrol-engined vehicle that can nip to 62mph in under six seconds. Being a lightweight, the Abarth is going to work its tyres, brakes and suspension components less heavily than a hulking great barge and you'll get decent range out of a tankful when you're at the track. More laps means more fun. Of course, some of those savings are going to be offset by repayments on those hefty £25,000-£30,000 asking prices, but if there's one thing we've learned to date, it's that Abarths tend to be one of the most bombproof new car buys as far as depreciation is concerned. In other words, once you've stumped up the asking price, this isn't going to be an expensive car to run.

The 695 is the car many of us had hoped Abarth would make but wondered if it had the courage of its own convictions. It has, and then some. In fact, this model is probably more extreme than any of Abarth's biggest advocates could have wished for. It's about the closest thing to a single-make tin-top racer that you can buy with vaguely sensible money and for those that have been put off by the big bills associated with wielding some serious brake horsepower at track days, here's a fun alternative that you'll be able to lap in all day without complaint and which won't present you with a brake and tyre bill that'll have you on a diet of ramen noodles and ketchup for a month. This one might well sell better than the hefty £25,000-£30,000 asking prices might suggest. Strong residual values will mean that the 695 won't cost a lot to run and there's a certain kudos in owning a car with this much charisma and which will easily embarrass some fairly serious tackle around a twisty circuit. Sometimes great things come from crazy ideas and this shot of distilled Abarth looks touched with greatness.