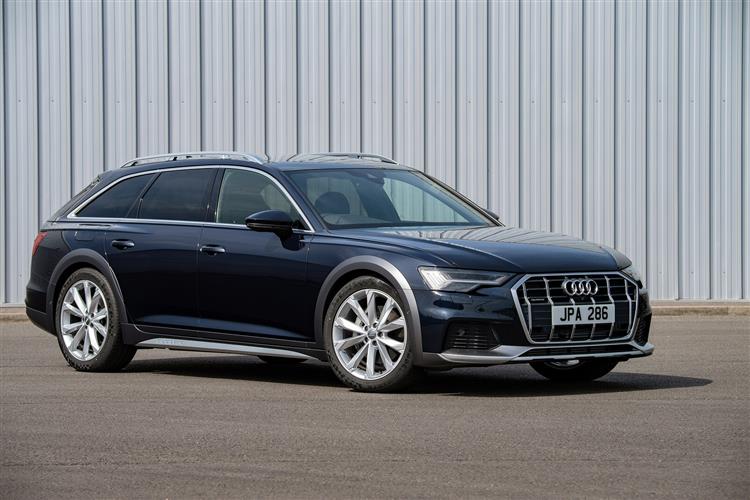 It's hard to think of a better 'one car fits all' solution than Audi's A6 allroad quattro. It's presentable in any situation and as at home in the city as it is blasting across continents or slogging its way along dirt tracks. What's more, it'll do all this in any weather, in total comfort and with some style. This '4K'-series fourth generation version launched in 2019 though, improved the concept further, with sleeker style, extra space, high-tech cleverness and greater efficiency from a mighty range of six cylinder engines that featured the brand's mild hybrid technology. It was, in short, a smarter choice for those needing occasional off road traction and all-weather capability. Let's check it out as a used buy.

Back in the year 2000, the original A6 allroad was introduced merely as a stop-gap until Audi could introduce its Q7 large SUV. Back then, that original A6 allroad was then - and subsequently always was - an Audi A6 Avant estate with clever air suspension for limited off road ability and a little more styling attitude. A simple enough idea you might think, except that at the time of this brilliantly executed model's launch, no one else had thought of it. Three further generations made the British market, the MK2 model of 2006, the MK3 model of 2012 and the MK4 design we look at here, introduced in 2019. By then, Audi had long since properly plugged the SUV-shaped gap in its line-up with its various Q-series crossover models. This A6 allroad though, was a more unique proposition, copied in concept at the time of its launch by other premium rivals (principally the Volvo V90 Cross Country and the Mercedes E-Class All-Terrain) but never bettered in execution. While other SUV-style all-wheel drive estates of the period - including Audi's own smaller A4 allroad - offered nothing more than plastic body cladding and a marginally higher ride height, this one did the job properly, with an air suspension system able to raise the car height enough to give it real off road ability. Such was always the A6 allroad's appeal, the car of choice for the clever few who realise they don't need a hulking great off roader for the style of sensible SUV-ness. And in fourth generation guise? Well, the recipe was further refined, with a more powerful range of more efficient 3.0-litre V6 engines and enough high technology to satisfy the most committed technophobe. The MK4 A6 allroad was sold until late-2021.

Audi tried to make the fourth generation version of this A6 allroad model look a little more striking. In profile, you notice the raised ride height - and the special body attachments that emphasise this rugged Avant model's extended capabilities. Aluminium-look underbody cladding provides additional protection, plus there are wheel arch trims finished in contrasting 'scandium grey' and allroad-specific roof rails to emphasise this car's leisure-orientated remit. Inside up front, the cabin is as well appointed as you'd expect from a range-topping A6 model, with leather-and-alcantara-combination upholstery and impeccable fit and finish, plus most original buyers specified Audi's Virtual Cockpit instrument binnacle digital display. Media features are taken care of by the usual black panel MMI twin-screen system on the centre stack, with a 10.1-inch screen for infotainment functions up top and a smaller 8.6-inch display (mainly for climate features) just below. Thanks to this car's long 2.93-metre wheelbase, the back seat offers reasonable space for three adults, but much more comfortable room for two and you get a fold down centre armrest with storage and cup holders. Out back in this estate model there's a 565-litre boot. The centre part of the 40:20:40-split rear bench can be retracted if you need to push longer items like skis into the passenger compartment without disturbing a couple of rear-seated folk. If you want to push the seat backs down completely, you do it by pulling on the cargo sidewall levers, which reveals a 1,680-litre space.

What to Look For

Earlier generation A6 allroads exhibited various different faults with the air suspension system, but we haven't come across any with this MK4 variant. Even so, check the system thoroughly when you test the car and make sure it rises and falls through its various modes as it should. The most reported faults related to interior trim and non-engine electricals. It's unlikely that this allroad model will have been used seriously off road but just in case, look out for bodywork scrapes and kerb damage to the large alloys. We've had some reports of issues with wear to the side bolsters of the leather seats, as well as squeaking front brake pads, so it's worth looking out for both of those. There were a few issues with the car's infotainment system, with phones not connecting properly and flickering screens being the main problem. The DSG automatic gearbox should be checked to make sure it's had a regular oil and filter change, as should the quattro four-wheel-drive system. Many A6 allroads will have been company or lease cars and, as a result, you should check the condition of the bodywork carefully. The high-quality fit and finish of an A6 also makes it an ideal candidate for clocking, so ensure the history is absolutely verified. There were a few manufacturer recalls on the A6 allroad you should be aware of. A small number of models made between July and September 2020 were fitted with faulty crash sensors for the front airbags. There was also more of an issue with moisture getting into the mild hybrid system on cars made between 2019 and 2020. If the A6 allroad you're looking at has a panoramic glass roof and was an early MK4 model, be aware that on a few cars, this roof became unstuck from its frame.

The adaptive air suspension system is this A6 allroad model's signature feature, combining air suspension with controlled damping. It adjusts the ride height depending on the road speed and the mode you've set in the Audi drive select driving modes system. For ordinary tarmac use in 'auto' and 'comfort' modes, this go-almost-anywhere 4WD estate will set off at the standard ride height, giving you a ground clearance of 139mm, which is then actively adjusted according to speed. At motorway speeds of above 74mph, the ride height is lowered by 15mm. For light off road surfaces in your A6 allroad quattro, you've a choice of the 'select' system's dedicated 'allroad' and 'offroad' modes. Even 'offroad' can cover speeds of up to 49mph, at which point the body will be set 30mm higher than the normal ride height. But let's say you've then a stretch of quite gnarly off road track to cover - the kind of thing that would damage a conventional A6 Avant, or any similar large executive estate model. For that, you'd activate the adaptive air suspension system's 'lift' setting, which you can implement at speeds of up to 22mph and which adds another 15mm to the ride height, raising the ground clearance 45mm above the normal position. Hill Descent Control and 'Tilt Angle Assist' systems are also included - and mean that you can get surprisingly far in this car off the beaten track. A display on the centre-dash MMI monitor shows the terrain you've covering and the car's current tilt angle in longitudinal and transverse directions. And the car can tow up to 2.5-tonnes. You're going to want to know about engines. One thing this '4K'-series A6 allroad wasn't short of was power - and in this MK4 form, this was delivered with a bit of eco responsibility thanks to Audi's MHEV 48-volt mild hybrid electrified engine technology. Even the entry level 45 TDI variant fronts up with 231PS, plus a huge torque figure of 500Nm from its 3.0-litre diesel engine. Alternatively, there's an even more powerful 50 TDI version of this powerplant with 286PS and 620Nm. The small percentage of customers who want a petrol-powered engine are catered for in the shape of the 55 TFSI model's 340PS 3.0-litre TFSI unit. The two diesels use an 8-speed tiptronic auto transmission; the petrol powerplant has a seven-speed S tronic dual-clutch auto gearbox. Either way, there's obviously quattro permanent four-wheel drive, but with this MK4 model you can't have it with an optional low range gearbox, as was possible with early generation A6 allroad models.

A6 allroad buyers are apparently amongst the most affluent of any of Audi's customers, so it makes sense perhaps that they're also amongst the cleverest, amongst the few choosing a car with four-wheel drive for what they actually need it to do, rather than buying into vague perceptions of safety and social standing. There are other biggish, plush estates from the MK4 A6 allroad's 2019-2021-era sales period that offer limited off road ability of course, but without the clever air suspension that really makes this car work in that respect, these can seem very pretentious and contrived. No, if you want the occasional benefits of better ground clearance and off road traction without the usual clunky dynamic downsides. If you can do without the image, expense and bulk of a fully-fledged SUV. And if, in summary, you want to make a sensible lifestyle statement with a car from this period, then we can't think of a much better way to do it.