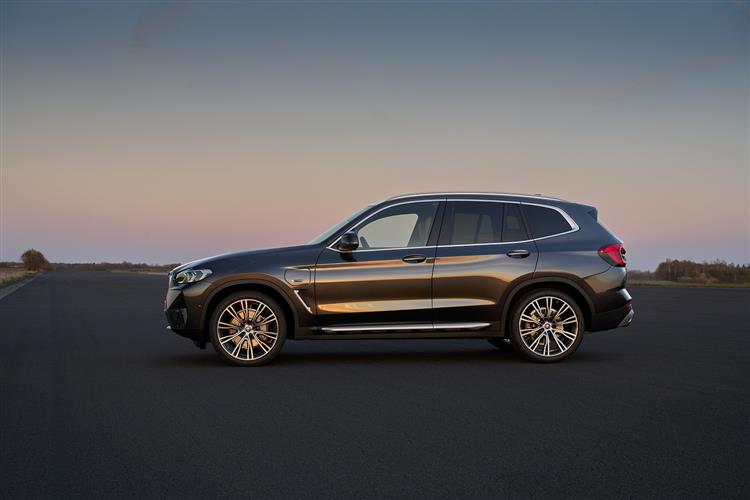 The X3 xDrive30e is a very complete PHEV package for customers searching in the premium part of the upper mid-sized SUV segment. Jonathan Crouch takes a look at the revised version.

Think of an electrified BMW and you tend to think of the i3. The Munich maker has also developed three other full-electric models, the i4, the iX3 and the iX, to sit alongside that car in its EV range. These partner in the showrooms with plug-in versions of most of the company's major models, including this car, badged the X3 xDrive30e; it's the plug-in BMW we're going to look at here. This PHEV variant uses much the same drivetrain already employed in BMW's 330e plug-in model, a car that's proved very popular with business buyers. But there are differences, plus the X3 body shape is obviously more practical. All in a package that delivers tax-friendly electrification but without the range anxiety you might feel in an iX3. But can it justify the inevitable premium pricing?

It's easy to just think that this X3 xDrive30e carries over completely the powertrain from the brand's more familiar 330e. And to some extend it does. As with that car, this mid-sized SUV uses a 2.0-litre four cylinder petrol engine mated to an electric motor, but that motor is a slightly less powerful one in this case, rated at 80kW rather than 83kW. The drive mode set-up in this X3 isn't quite the same as a 330e either, the xDrive30e using the slightly older tech from the 530e. That means you get 'Max eDrive' EV setting for full electric progress. And 'Battery Control' (which can hold the car's charge until you need it). Plus there's the 'Auto eDrive' option you'll most commonly use, which seamlessly mixes the electrical and combustion power sources as the software sees fit. The engine and electric motor's standard combined output is 252hp but this set-up also has an 'XtraBoost' feature, an on-demand performance system that increases the power output of the hybrid-drive system by a further 41hp at the touch of a button. The all-electric top speed is 87mph - full top speed is 130mph. Drive is transmitted - both in hybrid and electric modes - via an eight-speed Steptronic gearbox and xDrive intelligent all-wheel drive to enable the xDrive30e to accelerate from zero to 62mph in just 6.1 seconds. And there's a WLTP-rated all-electric driving range of up to 34 miles. One feature we really like is 'Anticipatory Hybrid Drive'; this uses data from the navigation system to decide how to use the PHEV system. The car might automatically switch into all-electric mode through a low-speed school zone for example. Or use battery power when driving uphill if there's a long downhill stretch afterwards where the regeneration system can recharge the lithium-ion cells.

This isn't the kind of Plug-in hybrid model you'll buy if you want to make an eco-statement. Unless you really know your BMWs, there's almost nothing to visually differentiate an xDrive30e from any other X3. This updated version of the third generation model gains a smarter look, courtesy of a larger front kidney grille with a single-piece frame. It's flanked by now-flatter headlights that now have standard LED beams and there's a revised front bumper with vertical air intakes; and a re-styled lower apron. The rear tail lamps are revised too, now of the full-LED sort, sitting above flush-fitting tailpipe trims. With a drag coefficient of 0.29Cd, the X3 boasts the slipperiest silhouette in its segment. And a 'Digital Key' system's now optionally available so that if you wish, you can unlock or lock the car with your smartphone. Inside, the twin-screened 'BMW Live Cockpit Professional' set-up is now standard. That brings a 12.3-inch instrument binnacle display and the 'BMW Intelligent Personal Assistant', a voice control system responding to the command 'Hey BMW'. 'Apple CarPlay'/'Android Auto' smartphone-mirroring is now (at last) standard. And the infotainment set-up now updates itself with 'over-the-air' upgrades, so you'll get into your X3 one morning and find it able to do something it couldn't do the day before. As before, there's just about room for three on the back seat, which features a reclining backrest. Finally, load capacity; thanks to the location of the PHEV battery pack beneath the rear seat, that's down with this plug-in variant - from 550 to 450-litres.

From launch, this improved X3 xDrive30e was priced from just under £51,000. As with all Plug-in hybrids, you have to have automatic transmission. In basic specification, this revised X3 xDrive 30e has a significantly improved range of standard equipment now that includes enhanced sports seats, with upholstery featuring smarter 'Sensatec' man made leather on base models. The X3 'M Sport' models feature Vernasca leather upholstery as standard. Automatic air conditioning with three-zone control is standard across the range, allowing separate temperature settings for the driver and front passenger as well as separate climate control at the rear. Whichever variant you select, it'll be easy to spend more than you budgeted or, thanks to a wider range of tempting options. Optional perforated leather climate seats will be popular, perhaps fitted out with active seat ventilation. Another option is a generously sized panoramic glass roof, while optional acoustic front side windows will complement the standard acoustic windscreen glazing to help create even lower noise levels in the cabin.

Despite the fact that these days, there isn't the government contribution towards the purchase price that helped to boost sales of earlier BMW plug-in models, the brand still reckons this PHEV derivative will be a strong seller. The installation of a 12.0kWh lithium-ion high-voltage battery means a potential electric driving range of as much as 34 miles. This PHEV also features regenerative braking to optimise efficiency. The system's high-voltage battery stores the energy captured during braking, with the electric motor taking on the function of a generator. The high-voltage battery also supplies the vehicle's electrical system. As usual with Plug-in hybrids, the official WLTP combined cycle fuel figure - up to 141.2mpg - needs to be taken with a pinch of salt, but the important thing is that the government believes the quoted CO2 return - up to 43g/km. Which means a super-low Benefit-in-Kind taxation rating of 12-13%. In comparison, an X3 xDive20d diesel is rated at 33-35%. Charging from a 16A source takes 2.6 hours from 0-80%. And the infotainment set-up's 'Intelligent Personal Assistant' voice-recognition software can answer questions like 'Where can I charge' and you can even use the sat nav system to reserve an electric charging station position ahead of time. Insurance is rated at group 38 or 39, quite a bit more than an xDrive 20d variant (group 29 or 30).

Justifying this BMW PHEV on economic grounds will certainly require some deft work with the calculator. As with any plug-in model, fuel savings alone won't do it; but adding in the BiK tax reductions might be enough to make you take a second look at an X3 xDrive30e, even with its £50,000 price tag. Did we ever think we'd be paying this much for a mainstream X3 model? Possibly not, but then did we ever think a decade ago that we'd have the chance to buy a petrol-powered one that could also offer an all-electric driving range of up to 34 miles? Right here, right now, plug-in tech makes more sense for more people, more of the time than full-EV ownership. In the future, that'll change. For the present though, if you can afford it, this BMW makes a compelling case if you want a more sensible sort of X3.