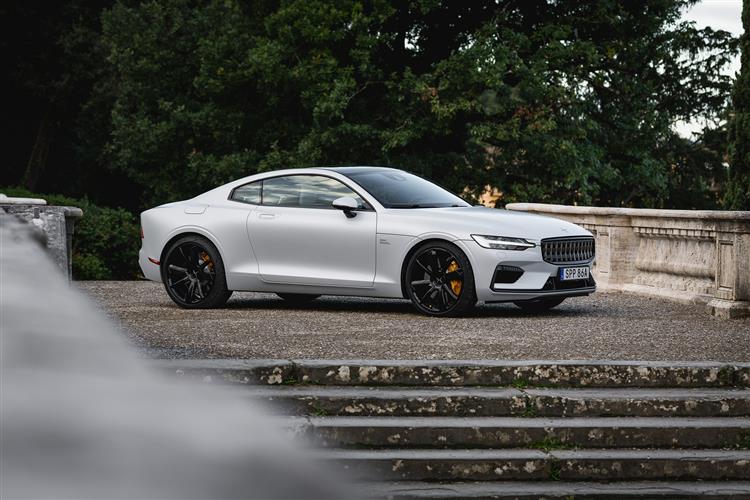 Can any Volvo-engineered product ever really be worth Aston Martin money? The Polestar 1 sets out to be. Jonathan Crouch takes a look.

There'll never be another car quite like the Polestar 1. There'll never be another Polestar model like it either because all future models from the brand will be fully electric and this is a plug-in hybrid. The world's most sophisticated plug-in hybrid as it happens. Only 1,500 Polestar 1 models were ever built at Polestar's plant in Chengdu, China, all of them in left hand drive form, to be sold in only nine countries across the globe, including the UK where this GT-style luxury coupe is rarer than hen's teeth. There's hand-crafted carbonfibre bodywork and the 609hp 4x4 drivetrain has two power sources and three electric motors. A car, in short, that's something of a collectors' item.

Talk about drivetrain complexity. There's an awful lot going on here. You might be disappointed to pay Aston Martin money and get the four cylinder 2.0-litre engine fitted here, but this one is both turbocharged and supercharged. And, so that there's independent drive for the rear wheels as well as those at the front, this powerplant's aided by a pair of active torque vectoring 85kW electric motors fitted to the rear axle, one for each wheel. Yet another motor - acting as a starter/generator - sits between the engine and the car's 8-speed auto gearbox. And powering the three electric motors are two large batteries, one over the rear axle and the other in the transmission tunnel, all of which helps to explain this model's substantial 2,350kg kerb weight. You'd want plenty of power to haul all that bulk about: how does 609hp and 1,000Nm of torque sound? That's good enough to get you to 62mph in just 4.2s en route to 155mph. So you'll need the huge steel Akebono brakes (as used on the McLaren P1). There's a choice of five powertrain settings, the default one being 'Hybrid', which prioritises electric propulsion unless you really do need all-out acceleration (in which case the car switches into the alternative 'Power' mode). The other options are 'Pure' (full-electric) and 'All Wheel Drive', plus there's an 'Individual' screen to allow you to set your preferred drive set-up. You can't adjust damping as part of that - not from inside the cabin anyway. This car has race-style manually-adjustable Dual Flow Valve Ohlins dampers that are formatted with a choice of 22 options to deliver suspension feel to suit your exact preference. Get it all right and you'll enjoy a simply astonishing level of twisty B-road agility. With rapid direction changes you simply wouldn't expect from a car of this size and weight. All of which, here in Blightly, helps compensate for the fact that Polestar production limitations mean that you're seated on the wrong side of the car. Something else you certainly wouldn't expect from a PHEV is a 77 mile all-electric driving range, but that's what the Polestar 1's large 34kWh battery gives you.

The Volvo Concept Coupe, a design study from the Swedish manufacturer that did the motorshow rounds back in 2013, was the starting point for a style of design language that today's characterises all of the Gothenburg maker's models. But that prototype's stylist, Thomas Ingenlath, always dreamed of it becoming a production reality and got his chance to facilitate that when he was appointed the new Polestar brand's CEO. The Polestar 1 sits on the same 'Scalable Product Architecture' platform used for all of Volvo's larger models, but at just 4.5-metres in length, it's quite a lot shorter than any of those. Plus it's made of far more sophisticated materials, mostly carbonfibre, which is used for the roof, the pillars and all the body panels. Huge 21-inch wheels are shod with grippy 30-profile bespoke Pirelli tyres. Inside, predictably, much is borrowed from Volvo, primarily the digital instrument panel and the central portrait-format touchscreen, but special leather finishing, bespoke trimming (mostly faux-carbonfibre) and little touches like the translucent gear selector help to create the required six-figure ambiance. You also get gold seat belts, colour co-ordinated with the brake calipers and the tyre valve caps. The front seats are big and spacious: the rear chairs aren't: even kids might complain. And there's a small 143-litre boot too, for what is supposed to be a Grand Touring coupe, mainly because it's full of battery. It's only 126-litres in size if you add in the charging cable bag - and can't be extended with a folding rear bench. Still, a gorgeous trunk detail is a glass partition at the back of the load space which reveals a bank of orange electric plugs and sockets.

Polestar hasn't been shy in its pricing here. £139,000 is a sum of money that would get you some intensely desirable Grand Touring super-luxury performance coupes from premium brands, among them contenders of the calibre of Bentley's Continental GT, a top AMG-engineered Mercedes SL or a Porsche 911 Turbo. But then this is nothing like any of those cars. It's the world's most advanced and fastest plug-in hybrid, only 1,500 will ever be built (all in left hand drive) and there'll never ever be anything else quite like it. There won't be any Polestar dealerships, nor will you be able to buy the marque's products from a Volvo franchise, though a couple of retail spaces (in Manchester and London) are planned to introduce customers to Polestar and advise on configuration. But the actual buying of a Polestar 1 will always be done online via an app (which will also be used to arrange servicing and aftercare). And will most take place via monthly subscription payments that will include maintenance and insurance. There are five exterior colours (with gloss and matte options), three wheel designs, two shades of Napper leather upholstery finishing and exterior brightwork in either gloss black or chrome. Otherwise, there are no other options. Everything comes as standard.

Thanks to the largest lithium-ion battery we've ever come across fitted to a plug-in hybrid (34kWh in size), the official WLTP-rated all-electric driving range is vastly greater than any other plug-in hybrid on the market - 77 miles. That puts the Polestar 1 in Category 1 of the UK government's hybrid electric car list. You could only imagine just how far this car might be able to go on a single charge were it not for its prodigious 2.3-tonne herb weight. You'll need to stay in the 'Pure' drive setting to get anywhere near the quoted range - and not put too much performance strain on the battery (though if you do, up to 100mph is theoretically possible without the petrol engine being needed). The car can default to electric drive from start-off and as your journey unfolds, will continue to try and use it wherever possible. The flip side of having that big battery is longer charging time than would normally be required for a plug-in hybrid, though around five hours from a typical garage wallbox should cover most of the daily battery replenishment you'd need. The quoted CO2 return is 15g/km and the combined consumption figure is 403.6mpg. Yes, you read those figures right. You'll be able to manage maintenance via a downloadable app. And the warranty back-up is pretty much the same as you'd find with any comparable Volvo.

This is the kind of car that would probably never have been approved by Volvo. But Polestar is, apparently, its own entity, with an R&D development budget funded directly by that Swedish brand's Chinese owner, Geely. As such, it's free to make statements of intent. And statements of technology. That deliver cars like this one. If you've been converted to the new-world electrified mind set but in another, less enviro-conscious life were charmed by big American V8 muscle cars, I could imagine that you'd be very drawn to a Polestar 1. That's because it wraps all that kind of power and bravado into a tech-laden battery-driven package with no small dose of performance charisma. Even if you're not be particularly enamoured by the end result here and don't like the borrowed Volvo bits, the tiny rear seats or the restricted boot, you can't deny that this car delivers a stinging rebuke to anyone championing the notion that electrified cars are all the same. And for that, I like it very much indeed.