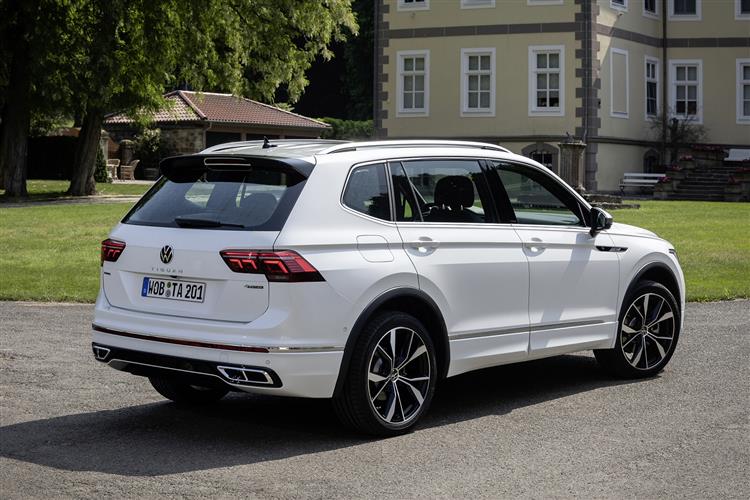 Volkswagen's 7-seat Tiguan Allspace gets an upgrade. Jonathan Crouch checks it out.

Increasingly, it's no longer enough to just offer a single mid-sized five-seat SUV. The market's now demanding that mainstream makers also provide variants of such models that are lengthened enough to be able to incorporate a third seating row. Volkswagen couldn't ignore this trend - and didn't, bringing us this bigger 'Allspace' Tiguan derivative in 2017, then updated four years on to create the car we're going to look at here. It's not much larger than the standard version; 215mm of extra length has been added, with the wheelbase extended by 109mm. Still, as we'll see, it's enough to make quite a difference to the way you can potentially use this car.

You wouldn't expect the changes made to this slightly lengthened Allspace model to have much effect on drive dynamics - nor have they. If anything, the stretched wheelbase has had a positive effect on this model's roadgoing demeanour, the extra weight and longer stance helping the suspension smooth over bumps through higher speed corners. Ride quality is an established strength of the ordinary Tiguan and remains an attribute here, aided immeasurably by the hi-tech MQB platform that sits beneath the bodywork. There are no changes to the engineering of this Allspace model over the ordinary Tiguan and Volkswagen has also worked hard to ensure that this variant's extra 215mm of body length doesn't upset that car's reassuring handling balance. At the foot of the engine range is a 150PS 1.5-litre TSI EVO unit with 'Cylinder-on-Demand' technology and 2WD. Most buyers of this car though, will probably want the alternative 2.0 TDI diesel, which now gets more efficient twin-dosing selective catalytic reduction system. Many likely customers will want this car fitted with the 2.0 TDI 150PS unit, which can be ordered with with front wheel drive or (with a DSG auto 'box fitted) with 4MOTION 4WD. If you go for the pokier 200PS 2.0 TDI powerplant, you have to have 4MOTION and the DSG auto. The 4MOTION and DSG systems are also mandatory if you choose the top 2.0 TSI petrol engine, available with either 190 or 245PS. The fifth-generation four-wheel-drive 4MOTION system provides a faster apportioning of power to all four wheels via a process that provides pre-activation of the rear clutch and improved operation of the electronic differentials. In recent times, nearly three-quarters of Tiguan buyers in the UK have shown a preference for AWD. In 4x4 form, the car has 200mm of ground clearance, 11mm more than it would have in 2WD guise.

As before, this is basically a long wheelbase version of the standard Tiguan. The main change with this revised Tiguan Allspace is a redesigned front featuring an independent radiator grille and elegant signature lighting which can now include the brand's latest IQ.LIGHT LED matrix headlights. A further new feature is the “sweeping” indicator function of the LED turn signals. On either side of the redesigned Volkswagen logo, an illuminated strip in the radiator grille adds a more striking visual note. These front changes have added 22mm to the overall length. Inside, as with the updated MK2 Tiguan, there's a new centre-dash infotainment system with an integrated eSIM. Plus a digitalised climate module with slider controls. there's increrased availability of the Digital Cockpit Pro indstrument binnacle screen. And the option of a new Harmon/Kardon audio system upgrade. Otherwise, things are much as before. This Allspace model's extra 60mm of overall length over a standard Tiguan makes possible the fitment of a third seating row. As with rivals, these additional pews are really only really intended for children, but they're no more cramped than those you'll find in obvious direct rivals like Skoda's Kodiaq or Nissan's X-Trail. You'll need to use the middle row's standard liding mechanism and push the centre bench right forward if lanky adults are to be accommodated at the very back. This Tiguan's added length also boosts boot space. With the rearmost seats in place, boot capacity is 230-litres; with the two seats stowed away into the boot floor, capacity rises 85 litres-from the five-seat version to a total of 700-litres. Drop the second row as well and capacity reaches 1775-litres. These will be satisfyingly spacious numbers for potential family buyers, even if they can't quite match the figures of the competing Volkswagen Group models this car shares its engineering with, that Skoda Kodiaq and the SEAT Tarraco.

Prices start at just over £32,000 at rates that represent a premium of around £3,500 over an ordinary Tiguan. Most buyers will focus on the 150PS version of Volkswagen's familiar 2.0-litre TDI diesel engine, priced from around £34,500 - or around £36,000 with DSG auto transmission. If you want 4MOTION 4WD with the 2.0 TDI 150PS DSG variant, then an extra £2,000 will secure it. As for trim levels, there's a choice of 'Life', 'Elegance' and 'R-Line' options, with prices up to around £43,000. All models come with alloy wheels, 'Climatic' semi-automatic air conditioning, a trip computer, all-round electric windows, an alarm, power heated door mirrors and a 'Composition Media' infotainment system. Safety kit includes a clever 'Automatic Post-Collision Braking System' that automatically brakes the car down to 6mph after a collision - so if, say, someone hits you and, understandably, you go to pieces, the car will automatically sort itself out. There's also a 'Front Assist' system that at speed, scans the road ahead as you drive for potential accident hazards, warning you if one is detected and automatically braking if necessary. You get that same kind of functionality at urban speeds too, as part of a 'City Emergency Braking' system included as part of the 'Front Assist' package.

Expect the 2.0 TDI 150PS 2WD manual variant many will want to deliver up to 53.3mpg on the combined cycle and up to 140g/km of CO2. That falls to a best of 45.6mpg and 163g/km for the 4MOTION DSG auto version of this variant. For the 2.0 TDI 200 4MOTION auto, it's up to 40.9mpg and 180g/km. Go for the 1.5-litre TSI EVO petrol option and the figures are up to 41.5mpg and up to 154g/km with manual transmission. Overall, though the upfront sticker price isn't cheap, whichever variant you choose, you'll probably be better off choosing this Volkswagen than a cheaper South Korean alternative when you factor in depreciation and whole life costs. And warranties? Well the standard package is three years and 60,000 miles. If you plan to see a bit more of the world in your Tiguan, there's a five year / 90,000 mile package. Whatever your decision, your car will come with three years of pan-European Roadside Assistance that has no mileage restriction. The paintwork warranty lasts for three years and, as you'd expect, this car is protected by a 12-year anti-corrosion package.

As with the ordinary Tiguan model, providing you don't expect this Allspace derivative to be among the cheaper choices in this segment, then there's very little not to like here. For the cost of, say, a five-seat Audi Q5 or Mercedes GLC, you can get yourself, in this seven-seat Volkswagen, a family SUV with almost equal badge equity but quite a lot more versatility. What's not to like? All the established Tiguan virtues remain - high residuals, impressive efficiency and strong build quality. And as ever with this model, there's an extra dash of polish in everything it does that'll make you feel as good when you open the bedroom window as you will when you're at the wheel.